What does inside and outside mean on a dairy farm? 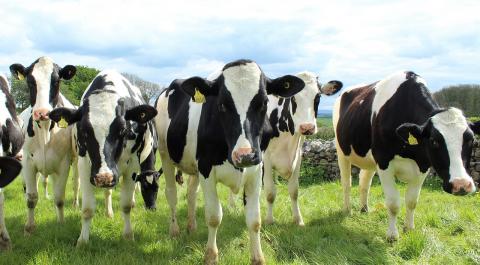 This morning I cycled to my friend’s house to work there as part of her extended household. At the roundabout I used to pass every day on the way to work, it suddenly felt odd to be outside. The familiar location made me think of pre-pandemic times so my mind automatically questioned whether this activity from the past was currently okay. You forget what the rules of being outside are, on a visceral level. The pandemic has changed our relationship with ‘outside’ and ‘inside’.

Before the pandemic, I asked the farmers I interviewed for the ‘Cows eat grass, don’t they?’ project how much time they spent working inside versus outside. The project is ostensibly about views on what cows eat and where they spend their time, but I wanted to know how that overlapped with farmers.

The question led to unexpected confusion about what I meant by ‘inside’ and ‘outside’. Was outside the fields, or also the cowsheds and milking parlour? Most people interpreted ‘outside’ to mean any space on the farm, that wasn’t a building for human habitation. But ‘outside’ for the cows was different: it meant in the open air. The farm buildings were ‘inside’ for the cows: they were the cows’ home or place of work.

People used arguments about cows and people having similar and different spheres to justify keeping cows in all year round, or the need for cows to graze. Cows are similar to people in that they need a comfy home: sheltered from the elements. For some that meant cows are happy to live inside all year round. Cows, like humans, aren’t wild creatures, they’re domesticated and used to millennia of agrarian civilisation. And a field isn’t a ‘natural’ environment either. It might not have shelter, it’s a highly managed environment. Better habitation inside for people has been part of the development of civilisation and it might be for cows too.

For farmers who did graze their cows, there was some overlap between farmer and cow experiences of outside. When the cows didn’t go outside in the winter the farmer didn’t do much outside either. Farmers said there weren’t many outside jobs to do in winter. The grass wasn’t growing. For those who let the cows out this was a changing of the seasons and a start to their outside work as well. They said it was a relief not to have to feed the cows inside every day and clean the shed. And they started doing their grass walk to keep on eye on how it was growing, as well as taking the cows in and out for milking. Some said the cows wanted to go outside. They could smell the grass, and they got restless and would stand by the door of the shed or roar to be let out.

Many people said they had ‘aesthetic’ or ‘personal’ preference to see cows outside. They said it as a personal view, not to generalise, and not to be disrespectful or judgemental of farmers who do house the cows all year round. And, frustratingly, one interviewee pointed out that it’s not even possible to talk about ‘cows’: maybe some like going outside and some like being inside more or less. Like people.

We could abstract the positive associations with ‘inside’ and ‘outside’ to make arguments about cows’ housing clearer. Outside represents freedom of movement and ability to express social behaviours, contact with the natural world: sun, earth, wind rain, and tradition and agricultural heritage. Inside represents comfort, security, safety, rest. Those are important concepts which give human and animal lives meaning, which is why the question of cow housing touches a nerve with the public and people in the industry.

Arguments from interviewees in the project did serve to complicate simplistic notions associated with inside and outside housing. But the core questions remain of how the industry can operate to give cows and humans a satisfying and dignified standard of living.

And what is the purpose of decisions about the conditions in which they’re kept, either inside or outside? Is it to make the cows lives, and the farmers’ and the consumers’ lives better in some way? Or some other reason, like just making more money, producing more milk or barely surviving within dairy farming?

Choice, control, autonomy and purpose are important concepts as we try to navigate inside and outside spaces in the current situation. And they’re important ones to keep in mind for the animals we’ve brought into the sphere of our civilisation.