What role for grazing in the UK and Ireland? 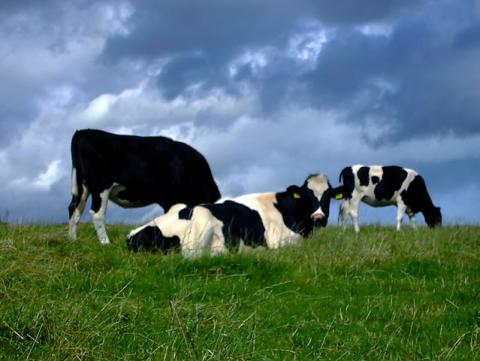 The first academic paper from the ‘Cows eat grass, don’t they?’ project was published this week. You can read an open access version of the paper here. One of the reasons I started this project was because I was coming across such different views about what the dairy sectors in Ireland and the UK should look like and I wanted to explore why this was. This paper tackles this by looking in detail at the views of key people involved in the dairy industry about where the dairy sector should go and exploring where these views come from.

I found that there were very different views of the ideal dairy sector in the UK and Ireland, between and within both countries. The research involved interviews with people from government, academia, industry and charities; as well as analysing documents.

In Ireland the importance of grass and grazing was emphasised again and again, specifically the low cost grass based system. Whereas in the UK the dominant view was that economic, environmental and animal welfare outcomes don’t depend on the type of system but rather on management and facilities: a ‘good farmer’ can make any type of system work.

In Ireland the grass based system was seen to be the lowest cost production system; to have environmental benefits because carbon is sequestered in soil; and high animal welfare because it is a ‘natural’ system where the cows can graze. Divergent views were that a higher input system is rational because Irish farmers are limited by land to expand and feeding more concentrate to increase yields can be economically viable. From an environmental point of view higher input systems mean more milk production per cow meaning fewer methane emissions per litre of milk. It was seen that animal welfare can be higher because ‘lean’ grass based systems can result in hunger in cows. Another marginal view was that the Irish dairy sector has expanded too quickly since quotas were removed in 2015, as a result farmers are suffering economically, and environmental and animal welfare outcomes have worsened.

In the UK in contrast this vision of a low cost pasture based system was not the mainstream view. Low costs pasture based systems were rather seen as carving out a niche on the market place through pasture based labels. Another marginal view promoted higher producing and indoor systems as the way forward for the industry.

The paper shows how some of the differences between Ireland the UK are related to differences in the structure of their dairy sectors – Ireland’s is based on seasonal production for processed goods destined for export whereas the UK has a larger demand for liquid milk all year round. It also shows how the views do represent different interpretations of a desirable present and future for the dairy industry and how views and values are shaped by particular contexts.