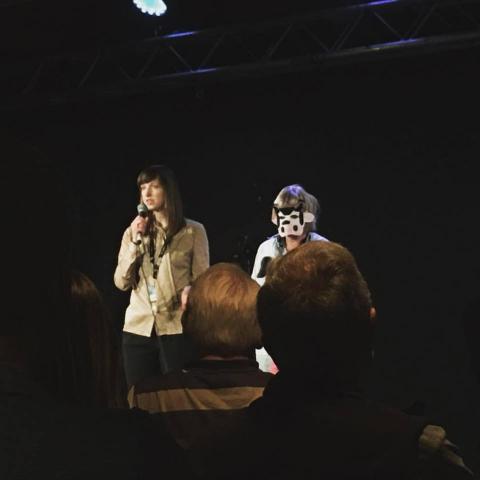 As a society we may be losing touch with how our food is produced, but one thing we all know is that milk comes from cows and cows eat grass. But is this the case anymore? And does it matter if this is changing? These are questions I wanted to explore in an event with the Cabaret of Dangerous Ideas at the Edinburgh Fringe, organised by the Beltane Public Engagement Network on the 24th August 2017. The idea behind the event is to bring academic research into the public domain and facilitate discussion.

Indoor dairy farming is becoming increasingly common in the UK with a survey published in 2014 showing that 16% of farmers house all or some of their cows all year round. This figure is likely to be higher in Scotland, which has higher average herd numbers. Indoor dairy farming has proved to be contentious, however, with a study from 2009 showing 95% of the public did not support it.

The Fringe event involved outlining how conventional dairy systems operate, with cows housed for half of the year and put out to grass for the other half. We discussed changes in the dairy sector that have led more farmers to move to indoor systems: as farmers go out of business because of difficult economic conditions, many of those remaining are looking to increase production to stay in business. This means feeding a greater number of cows more energy dense food indoors rather than a smaller number of cows eating grass outdoors.

The event was attended by around 40 people and all but 4 of those indicated they thought cows should have access to grass during the year. The discussion around the topic was lively and nuanced with points put forward by those working within the agriculture industry, animal welfare groups, farmers and members of the public, expertly facilitated by comedian and compere Susan Morrison. Audience members noted that welfare and environmental impacts were inferior in indoor systems compared to grass production.

Countering this, others argued that farm management is the most important factor in ensuring animal welfare, rather than the type of production system and that with the right facilities and stockmanship, outcomes in indoor systems can be just as good. Still others stated that in some places farmers themselves were resisting indoor systems because of the amount of debt they incur, which makes them more vulnerable to fluctuations in milk prices.

There was general agreement that there is a lack of communication and understanding between those working in the agriculture sector and the public. But, the Fringe event clearly demonstrated that changes in the dairy sector do matter to people. All that is needed is space for discussion, in which information can be exchanged and values articulated and reflected upon. The Fringe event offered one such space, in what will surely be an ongoing conversation.