Is it ‘natural’ for cows to graze? 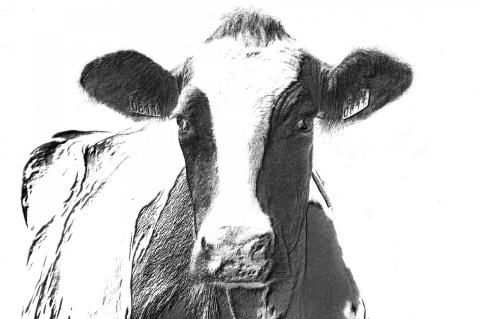 This last while, I've been chewing over the value of the word 'natural' in debates about agriculture. In farmer and stakeholder interviews about the ethics of cows staying indoors all year round, the word 'natural' has been coming up again and again. It is however a notoriously complicated and thorny word, with several meanings. Natural can mean the opposite of artificial: something that is self-generating and doesn’t depend on human interference, like a forest or an animal. There’s the idea of ‘natural purpose’: what humans or animals are meant to do because they evolved that way. And the ‘unnatural’ is a negative word that can mean something is monstrous or dangerous.

All of those meanings came up in the interviews. Many people said they like to see cows graze because it’s natural: cows have evolved to graze and we'd arguably change cows' nature if they don’t graze (it’s unnatural). And there’s the idea that what is natural is good: there’s more ‘nature’ in a field than a shed, and allowing cows to experience nature is a good thing.

Those who don't think grazing is necessary said that the 'natural' doesn't have any value in this debate: cows are no longer 'natural' creatures since they've already been bred to fit into a modern, human made system. And the 'natural' in animal welfare is confusing and misplaced because hunger, violence, distress, and suffering are part of 'nature'. Surely one of the benefits of farming is cows having a better, cosier life than their natural ancestors?

It's a philosophical debate as much as one based on science, about the meaning and role of the ‘natural’.

Thinking about it made me go back to the American feminist philosopher Donna Haraway’s 1985 essay ‘Cyborg Manifesto’ where she asks us to go beyond ideas about natural v artificial. The essay memorably ends with the line:

“I’d rather be a cyborg than a goddess.”

Haraway is saying that a simplistic and innocent idea of ‘nature’: mother earth or a nature goddess, is no longer helpful to us. Instead, she proposes the idea of the cyborg, where the difference between animals, humans and machines is not clear, and leaving behind old distinctions between the 'natural' and the 'artificial' allows us to imagine a more creative, playful and ethical future.

I remember reading this essay in the University of Nottingham Library in the first year of my PhD in 2011. I was drinking an overly sweet Starbucks (milky) hot chocolate and struggling to digest the meaning of Haraway's words. At the time, I didn't really have a frame of reference to understand what she was saying.

Each time I re-read it I understand it a little better, and it came to mind analysing the dairy farmer interviews. In the stories farmers told about their cows, they understandably didn’t argue that the cow were ‘natural’ in the sense of separate from human interference. When they talked about the cows’ desire to graze and their nature as grazing animals, they described this nature as shaped by the domesticated routine on the farm. The farmers I spoke to told stories of the cows knowing when it was time to go out in spring. It might be the smell of the grass growing, or the weather changing, or the cows' internal clock, but at a certain time in spring cows 'roar' to be let out. (Lots of people said 'roar', I think cows that 'roar' should feature in children's books more). If the cows heard a gate rattling, they would rush towards it thinking it was time. You might have seen videos of cows frolicking when let out in spring. If you haven't, look them up, it's really fun.

But equally, these farmers said cows were happy to come inside in autumn. You could leave the gate open on a cold November day and no cow would move. And many farmers whose cows were housed all year round told stories of a gate being left open and the cows having no interest in outside the shed.

This comes back to Haraway: there is no such thing as a purely ‘natural’ dairy cow (a ‘goddess cow?’) there are only ‘cyborg cows’: cows that know how to interact with the various machines on the farm (slurry scrapers, feed dispensers, milking machines etc.) and whose desires to graze (or not) are shaped by what’s comfortable and feasible on the farm, as much as by their ancestry as grazing animals.

Even if cows aren't 'natural' in the sense of separate from human interference, I think the concept of nature could still have value in debates about dairy farming. Personally, I’m interested in the idea that nature/the outside world has some sort of intrinsic value because it’s natural. There are lots of studies showing being outside/in nature/in greenspace is good for human wellbeing. There are different theories as to why this is: physical activity, social activity, connection with place etc. We might instinctively feel that’s being ‘in nature’ is good for us, but it’s actually quite hard to pin down why that is.

I think it’s plausible that whatever is good for us about being in nature could also be good for cows. And so, we can think about what it is about ‘nature’ that dairy cows need, and how that fits in with an indoor or grazing system.