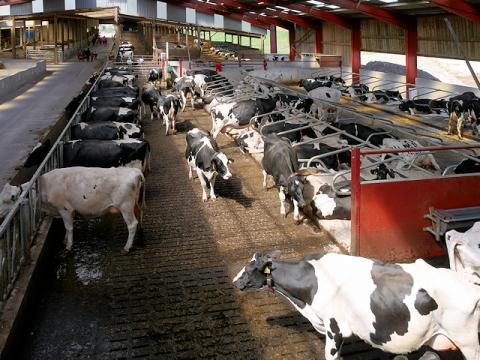 I’ve often been caught out by language and terminology during interviews with farmers; not least in the North East of Scotland (e.g. not realising ‘backend’ means autumn and farmers were saying they vaccinated their cattle in the autumn. I was thinking "I'm pretty sure you're supposed to vaccinate them in the neck..."). I say cow for all cattle when a farmer might use it to mean a female bovine animal that has given birth at least once. They might also refer to calves or heifers or suckler cows or store cattle or steers or stirks or followers or bullocks, or bulls or cast cows or prime cows or pedigree cows.

Terminology around farm systems can be tricky too. The words used to describe different farm systems can carry implicit judgments and mean different things in different contexts. A 'traditional' system in both the UK and Ireland involves the cows grazing on pasture during warmer months and being housed in the winter months. Because of the rise of indoor dairy farming, and controversy related to this, this system is also being called 'free range' dairy farming, and is being marketed as such.

I use the term ‘indoor farm’ to mean a farm where all or some of the cows are housed all year around. These systems are also referred to as total confinement systems, fully housed systems, zero grazing or continuous housing. There are subtle differences of meaning here. Indoor systems usually involve more feeding of concentrate, higher energy density feed than grass so cows can produce more milk. A large herd that need a lot of calories a day is usually the reason for housing cows all year around. A ‘zero grazing system’ can be used to mean this system or it can mean a system where grass is cut with a machine from the fields and brought into the cows inside. This is to make the most of the grass produced: all the grass is harvested and the system can be used on a farm with fields far from the milking parlour. This might not be done all year around, so cows might not be housed all year around, though the term is also used for year round indoor systems. I’ve been using the term ‘cut and carry’ for this system. A table below shows the terminology used.

Then there is terminology around indoor farms which signals that it is a step change from what went before, for instance mega farm, super dairy, factory farm, industrial farm or concentrated animal feed operation or CAFO. These terms came into common usage around the time of the controversy about the proposed ‘super dairy’ in Lincolnshire in 2010. The prefixes ‘mega’ and ‘super’ could be positive, but when put before ‘farm’ become negative, showing that the scale is jarring in the context of the UK countryside. I took a taxi to a poultry farm to do an interview recently and the taxi driver was describing his location to someone at the taxi office and said “I’m at the big factory farm on x road.” I wondered what made him use that term. The term didn’t carry a judgement, but was the best description to get recognition from the person on the end of the line where he was. A place with large sheds and animals on a small piece of land is not just a ‘farm’. 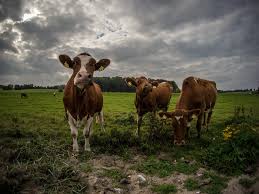 The terms ‘extensive’ and ‘intensive’ are also tricky. According to the Cambridge Dictionary an intensive farms is a farm that uses a large amount of inputs and produces a large amount of outputs per unit of land. The most important input to differentiate systems is feed. So I’ve been using ‘intensive’ to refer to farms where a large amount of the milk is produced from energy dense feed bought onto the farm. I’ve been using the terms ‘extensive’ and ‘pasture based’ to describe farms where a lot of milk comes from grass. But this caused confusion on a recent trip to Teagasc in Ireland. Farms in Ireland produce most of their milk from grass (either grazed grass; bringing the grass to the cows through ‘zero grazing’; or fermented grass stored for the winter - silage). Within that there are more ‘intensive’ grass based farms that use more fertiliser and other inputs to produce more grass and so more milk. They are intensive under the definition, but not under my definition which focuses on bought in feed. Within Ireland they need a term to distinguish between higher and lower production grass based farms. They said for them a sheep hill farm might be extensive, but a productive dairy farm is not.

So there are ‘zero grazing’ indoor farms or ‘intensive’ farms were cows do eat grass. What might be a ‘factory farm’ for one person is just a ‘farm’ for another. Unlike the many words for cows, the connotations and meanings of the terms for farm system are not fixed but change based on the setting and speaker. Fluctuating meanings and terms might yet solidify as the dairy sector changes.