What does grass fed milk mean? 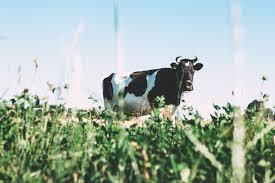 A man in California is suing Ornua: the organisation that markets and sells Irish dairy products abroad over claims that Kerrygold butter is “grass-fed”. The man is claiming false advertising because Irish cows do not subsist on grass alone but their diet is supplemented by grain and meal which may include genetically modified (GM) ingredients.

The court case highlights the ongoing debate over what “grass fed” dairy produce means and if there are benefits to it. Most of us would assume that milk is made from cows that graze, but in fact grazing is a minority practice in dairy production systems globally. There are claims that up to 90% of milk globally is produced from cows that don’t graze.

Grass fed milk is promoted by its proponents, including those in Ireland, as more environmentally friendly, higher animal welfare, more nutritious and tastier than milk produced from cows who don’t graze and/or have a large proportion of cereals and meal in their diet, based on scientific evidence. These claims are being hotly disputed by other countries however.

The role of concentrate and meal in cows’ diets is controversial because, as the lawsuit highlights, supply chains using genetically modified ingredients are not separated out in conventional systems. Genetically modified foods for human consumption are generally not allowed on the EU market, but are allowed for animal feed. Other ingredients such as soya and palm oil have been controversial because of links with destruction of valuable ecosystems and unfair labour conditions.

Studies show that the public want cows to graze. Market demand provides Ireland with a unique marketing opportunity within Europe to promote their “grass based” production system. The vast majority of dairy cows in Ireland spend the majority of their time on grass, and in the south west dairy hub cows spend up to 300 days a year on grass.

But there is no agreed definition or market protection of “grass fed” produce in Ireland. There is an EU directive on the definition of “free range” poultry products, but not on dairy. I’m currently undertaking interviews with key stakeholders in Ireland and most state that a definition is necessary to differentiate Ireland on the market place. Bord Bia, the Irish Food Board, are considering different definitions, including 95% of fresh weight feed coming from forage: grazed grass and silage. The co-op and processor Glanbia have developed their own Truly Grass Fed label which stipulates at least 250 days on grass.

Grass based labels have emerged from other countries in the meantime. There are claims in Ireland that some of these may not actually involve grazing as per the traditional system, but only need access to pasture to comply, which may be a paddock that cows loaf in but do not actually graze from.

The UK has a more diverse range of dairy farm systems than Ireland, from “traditional” seasonal grazing with little additional feed up to total confinement system with no grazing. A number of grazing labels have emerged here, see the table below. However, in interviews for the ‘Cows eat grass, don’t they?’ project many key stakeholders in the UK do not support the differentiation of the UK market based on grazing. Instead they question the claims that grazing provides better environmental, welfare, nutritional and taste benefits, and see labels as creating confusion and division in the industry. A recent Nuffield Scholarship report by journalist Tom Levitt called for more differentiation and branding in the UK sector to add value and communicate to consumers that milk was a premium product, but the report did not support grass based labels.

An EU directive on what “grass fed milk” means, if it were to happen, might suit those in continental Europe who graze for less of the year, but not help Ireland show that its system is different. Such a directive would also likely not be welcomed by many in the UK who don’t want this distinction to grow on the UK market. This debate will continue to heat up in future and questions such as: Should ‘grass fed cows’ eat GM feed? Does pasture based milk have to involve the cows actually eating and producing milk from grass or is enough for them to be in the open air? Will there ever be cross-country scientific consensus over welfare, environmental and nutritional benefits, or otherwise, of grass fed milk? Is grass fed milk a product for the masses or a niche market? Is a measure of days at grass or proportion of grass in diet a better metric for what “grass based” means? will play on.